IS THE RIDGEBACK
RIGHT FOR ME?

© 2004 Denise Flaim, www.revodana.com  Reproduced here with permission of the author.

The key to answering that question -- for any breed, not just the Ridgeback -- is to research its origins and history. There, you will find the essence of the breed -- the hard-wired traits that may or may not work for your lifestyle.

While they may look like sporting dogs or working dogs, Ridgebacks are hounds. They were bred to pursue large, oftentimes dangerous game, relying solely on their own judgment and intelligence. Unlike a Golden or Lab, a Ridgeback was not bred to care about your opinion. Out in the field, checking in with their handler was counterintuitive -- a split second of distraction could mean death. This great athleticism and intelligence is what attracts many of us to the breed. But it also means that the Ridgeback is an intensely prey driven dog. He is NOT reliable off leash. If a squirrel or other creature crosses your path, your Ridgeback will be off like a shot. Your commands will go unheeded. If there is a two-lane highway between your Ridgeback and the squirrel, well ... you can finish the sentence.

Keep this prey drive into account with small children. If a toddler runs across the room shrieking, the average Ridgeback will chase him, probably even knock him down. This isn't aggression, it's simply instinct, and when confronted with the sobbing child, the Ridgeback will invariably lick his face and ask what all the fuss is about. Ridgeback tails are powerful and, when employed in the expression of happiness, can leave welt marks.

Ridgebacks play the same way they hunt -- chasing, leaping, body-slamming. Factor in this physicality if you have children under age 5 or if you have another breed of dog -- say, a dachshund -- who might be too "crunchy" for this play style. Also, Ridgebacks are often not a good mix with "serious" breeds, such as Akitas and mastiffs, who demand deference. The Ridgeback's in-your-face physical style and jokester attitude (they think running headlong at you at 35 mph is amusing) might push those breeds to their limits.

Because he survived on the hunt using his own wits, the Ridgeback is intensely independent. A Ridgeback loves his humans, but he does not need their endless approval. A Ridgeback is NOT reflexively obedient. This doesn't mean he is untrainable, but is does mean that he needs short, positive training sessions. He will not sit 10 times in a row simply because you asked him: He will think, after the second or third request, that you are just being stupid.

There are some people who require their dogs to heed their every command -- they want a very hierarchical relationship. The Ridgeback will not provide this. He will love you and he will protect you, but your wish is not his every command. If your ego cannot handle that, do not get a Ridgeback. In the Obedience ring, I have completed entire exercises by myself -- with my dog looking on from the middle of the ring. You need a sense of humor!

The Ridgeback requires a relationship of trust with his handler. This is a breed that makes decisions for itself: Compulsion is doomed to failure. Instead, the Ridgeback must be reasoned with. He will not do something he thinks is life-threatening or dangerous "just because" you said so. This is also a breed that must be owner-trained. You cannot hand your Ridgeback off to a trainer, or send him off to "camp." He responds to only those whom he trusts or likes.

Unlike a sporting or herding dog, a Ridgeback is not "on" all the time. Provided he gets enough exercise, he is content to slumber the day away. He housebreaks easily and is not a career chewer (though, like any dog, he needs to be taught not to teeth on the Chippendale highboy). If given lots of exercise and time with his owner, he can make a suitable apartment dog. He will not, however, tolerate being tied up outside, away from his home and family.

Many people see the Ridgeback's imposing presence and physique and think he is an aggressive guard dog. Not true. Like most of us, the Ridgeback is reserved with strangers: He saves his effusive displays for those whom he loves. But he is never suspicious of guests. He accepts them into his home with the same graciousness that his owner does. He assumes that you are decent and honorable unless proven otherwise.

Many Ridgeback owners are dismayed that their dogs, especially their males, do not "act protective." That is because they have found no cause to be. The Ridgeback is a very intelligent and discriminating companion. If and when he needs to defend you, he will. Otherwise, you can expect his good nature and pack mentality to extend to all those he meets, provided he has been properly and positively socialized.

Though he is powerful and stubborn, the Ridgeback is at heart a sensitive soul. He does not tolerate harsh treatment. He cannot handle the corporeal punishment -- such as constant collar jerks or "alpha rolls" -- that a sporting dog would just shrug off. The Ridgeback, after all, is a hound, just like a saluki or an Afghan: He is sensitive. When confronted with abuse or harsh handling, he either shuts down -- or escalates his response in an effort to get away. This is not bad temperament: It is mishandling on the part of the owner.

This is arguably the biggest lap dog in the universe. The Ridgeback loves his comforts, and will snuggle with you, cheek to cheek, on the sofa. Like canine canaries, they prefer to sleep entirely covered. And they love -- repeat, love -- food. Care must be taken that they do not get obese or develop the Ridgeback skill of counter surfing: An unattended loaf of bread is fair game.

Is the Ridgeback right for you? Perhaps the better question to ask is, Are you right for the Ridgeback? This breed needs a unique hybrid of an owner: Someone who is firm and consistent, so that the Ridgeback learns his boundaries and grows up to be a model canine citizen. But also someone who respects this dog's intelligence and independent nature, and is willing to work **with** it, not against it.

Denise Flaim is a  professional journalist and author from New York. A Ridgeback owner-breeder-handler, she also serves as the Rhodesian Ridgeback Club of the U.S., Inc. Historian and co-chairs the Health & Genetics Committee. For more information on Denise and her dogs, please visit Revodana Rhodesian Ridgebacks. We sincerely thank Denise for allowing us to reprint her fascinating, informative articles on our website. 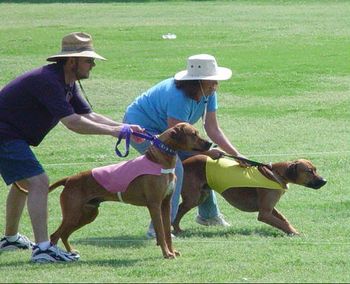 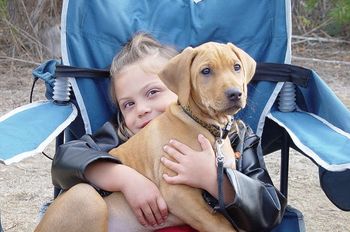 For their relationship to thrive, children and Ridgebacks must be taught mutual respect. 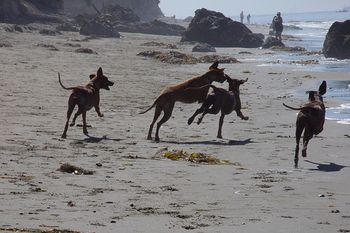 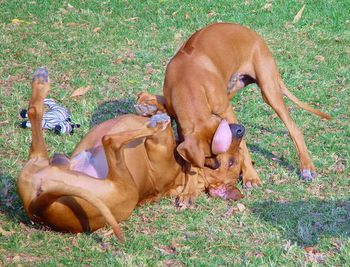 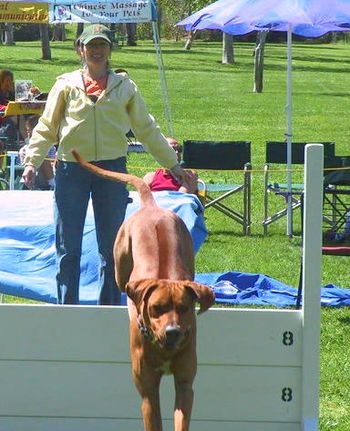 Ridgebacks are NOT reflexively obedient. Short, positive training sessions are best - coupled with a sense of humor! 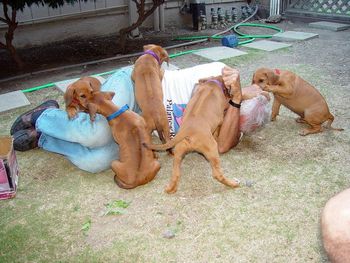 Ridgeback puppies ganging up on their unsuspecting "victim." 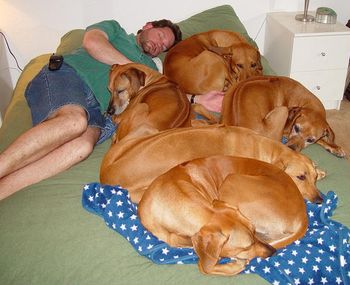 Provided they get enough exercise, Ridgebacks are content to slumber the day away. 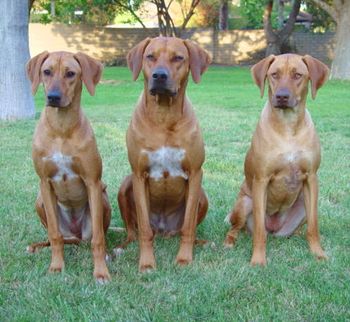 Ridgebacks are naturally protective without being aggressive - reserved with strangers, devoted to those they love. 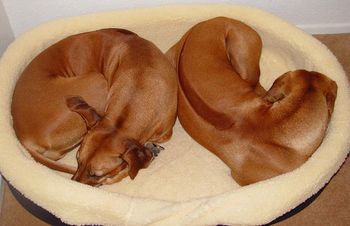 Ridgebacks are powerful and stubborn, yet very sensitive. Harsh treatment is not tolerated. 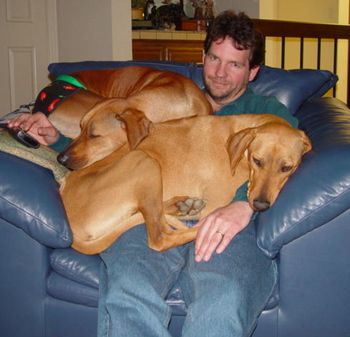 Exhibit A: Ridgebacks are arguably the biggest lap dogs in the universe. 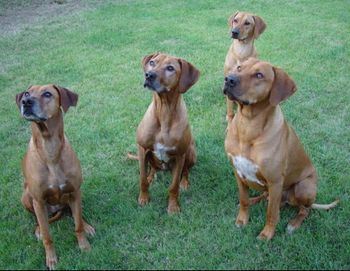 Ridgebacks are great dogs, but are not right for everyone. Research whether their hard-wired traits mesh with your lifestyle.